Psycho-Geographical Wizard of the Dribble

Train driver turned teacher (and still tutoring in schools after all these years) Stuart has played for Swindon Boys in football and rugby and played competitive football in the Swindon League.

A self confessed “wizard of the dribble, feint and body swerve”, he founded Stroud Football Poets with Dennis Gould in 1996 after trying to get Dennis to perform his football poems. Stuart was told to write his own first – which he did.The site itself launched in June 2000 when  original web-master Dave Cockcroft , Stuart and Crispin entered their first few poems . The rest is history.

Since that Damascene moment, Stuart has also written a variety of plays about his locality, which have been recorded: the tramp poet W. H. Davies, the Spanish Civil War, Laurie Lee, the co-operative movement, and WW1 have all featured within his oeuvre.

Stuart is more of a psycho-geographical writer these days, and regularly leads performative history and literature in the landscape walks: his next one is a Weavers and Workhouse walk for the Stroud Fringe. He is also currently involved in the writing, direction and production of a film about the Chartists.

Following years of dedicated editorial work on page and stage since its inception, Stuart still plays an integral part, both as contributor and live performer with Football Poets. His most recent performances include in 2014 & 2015 the Football Poets acclaimed theatre/music/spoken word production: Trenchcoats for Goalposts ~ Christmas Truce 1914. This show is also being performed in Gloucestershire this Winter 2016.

He blogs regularly at A Guide to the Radical History of Stroud and the Five Valleys and has a new website called Radical Stroud. 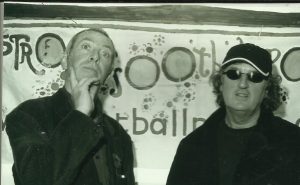 Pic1:An extract from A Christmas Truce poem by Stuart appears in Nancy’s autobiography.(Bless!)