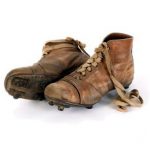 active 1 year, 7 months ago
A true story. In 1966 I was in the army and on manoeuvres in Germany. We were camouflaged up in the woods on the ranges. There were a lot of wild pigs on the ranges. We were told not to go near a pig because they were not inoculated against TB. Well, I was kicking my heels one morning and decided to dig a pig trap. I dug a pit, tapering in so […] View